LEAETHER STRIP is the solo-project of Danish electronic industrial artist Claus Larsen. First signed by the German Electro Label Zoth Ommog in 1989, LEAETHER STRIP quickly built a buzz as one of the most exciting emerging acts in Europe in the early 90′s. LeÊther Strip has been and still is a big inspiration to many of todays younger acts and is still one of the most productive artists in the scene.

After a very successful “Japanese Bodies” 12″, the debut album (“The Pleasure of Penetration” ” released in 1990) instantly established itself as a classic, featuring a punishing rhythm pace and aggressive electronic style with distorted vocals that he has since become renown for and that is often described as “LEAETHER STRIP”s trademark”. The following albums and MCDs allowed LEAETHER STRIP to conquer the hearts of hundreds of thousands of fans of electronic industrial music across the world and to become one of the leading acts on the cult Zoth Ommog label. Both “Solitary Confinement” (1992) and “Underneath The Laughter” (1993) albums helped Claus Larsen establishing his position on the music map, reaching top sales in both the European and American electro scenes. While reminding the powerful angst seen in other electro acts such as FRONT 242, SKINNY PUPPY or even NINE INCH NAILS, LEAETHER STRIP rapidly got the reputation to be carrying a deeper message and meaning in his work through his very personal intense music and the sometimes emotional, sometimes political dimension of his lyrics.

After a 5 year break from the music business, from 2000 – 2005, LEAETHER STRIP returned to the scene and since then have been very productive. 2009 Marked the return to the stage, and since then Claus and his partner have been playing shows around the world. LEAETHER STRIP shows are always very energetic and you can expect to hear songs from his whole repertoire. 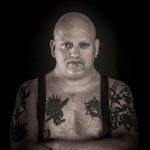 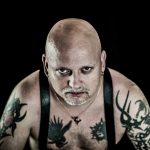