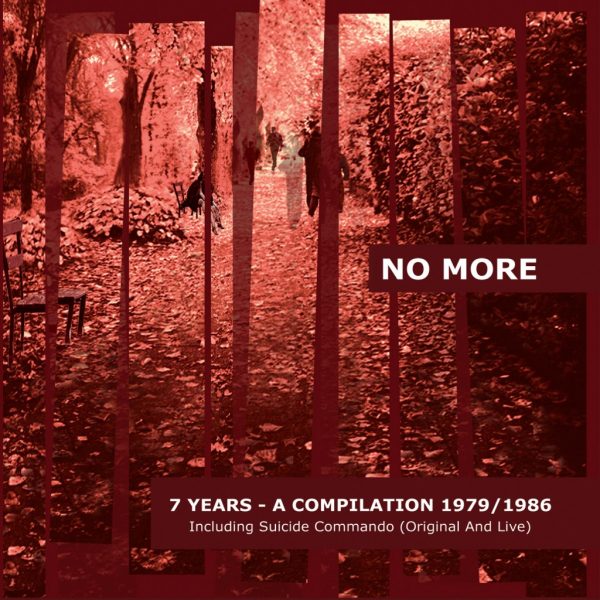 7 Years Re-Release of the compilation that covers up songs from the first seven years of NO MORE’s discography.

At the end of 2008 NO MORE (condensed in the duo Tina Sanudakura and Andy Schwarz) got back on stage 22 years after the band split up in the 1986. In the following NO MORE successfully played all over Europe and released their new album “Midnight People & Lo-Life Stars” in 2010. So this is the perfect time to re-release the NO MORE compilation “7 Years” (first release 1990, Germany only) and take a look at the time before their comeback. Since this was the pre-CD era and all the original vinyl releases are sold out and are hard to get nowadays, “7 Years” is a fantastic possibillity to contemplate NO MORE‘S work in the 80s.

The focus lies on the last line-up (from 1984-1986) and contains, amongst others, songs from various 12″ maxi-singles, the mini-LP “Laughter In The Wings” and their final album “Hysteria”. The band called it a day during the recordings of “Hysteria” and Tina Sanudakura & Andy Schwarz recorded the song “7 Years” as a summary of these NO MORE years. And they certainly didn’t think of coming back at that time. The compilation certainly contains the original version their all time classic “Suicide Commando” and is still part of many DJ-Sets ( This song was also remixed by DJ HELL, VITALIC, ECHOPARK) A song that refuses to die. A couple of years after these Germans recorded this, it spread like a virus to become a cult classic. The virus is still spreading to this day.” (Optimo, UK) NO MORE refused to play their “hit” during the last two years before splitting up, with only one exception: their farewell concert at the Old Daddy concert hall in Oberhausen, Germany. Luckily this concert was taped and therefore a live version of “Suicide Commando” can be found on here.

Be the first to review “7 Years – CD” Cancel reply