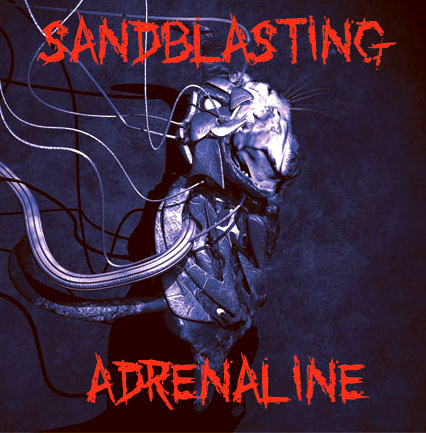 Why Adrenaline? Adrenaline is an hormone present in the adrenal glands and constitutes the chemical mediator of nervous impulses. Adrenaline can be obtained through extract in adrenal caps and also in a SYNTHETIC way… through the manipulation of the wave shape of analogic synthesizers and the use of samplers and effects. The rust layer that covers the brains of the entire human race has built up to a thickness that renders a single treatment of sandblasting useless in order to turn on the functions of this vital organ.

SANdBLASTING, with this new album, has tried to add to the previous sandblasting treatments a creation of one aural mixture to act as adrenaline, in order to bring back the brain functions of the human race. Adrenaline, in fact, stimulates cardiac operation creating an increase in the frequency of heartbeats, and an increase in cardiac pressure. SANdBLASTING is a complete treatment of 72 minutes composed of rhythmic noise, industrial, breakcore, power electronic sounds, and the use of audio samples purposely selected from various films and video games to create an atmosphere distressing and psychologically chilling. The new release of SANdBLASTING touches on the hard and violently impacting sounds of WINTERKALTE, TEST DEPT, MERZBOW and HYPNOSKULL. A treatment of SANdBLASTING is the equivalent of an adrenalin discharge. Produced by JUSTIN BENNETT (live session of SKINNY PUPPY, PIGFACE), STEFANO ROSSELLO (BAHNTIER) and Luca Torasso (Mr SANdBLASTING) mastered by ERIK VAN WOTERGHEM (SONAR, INSEKT, MONOLITH).

Be the first to review “Adrenaline – CD” Cancel reply