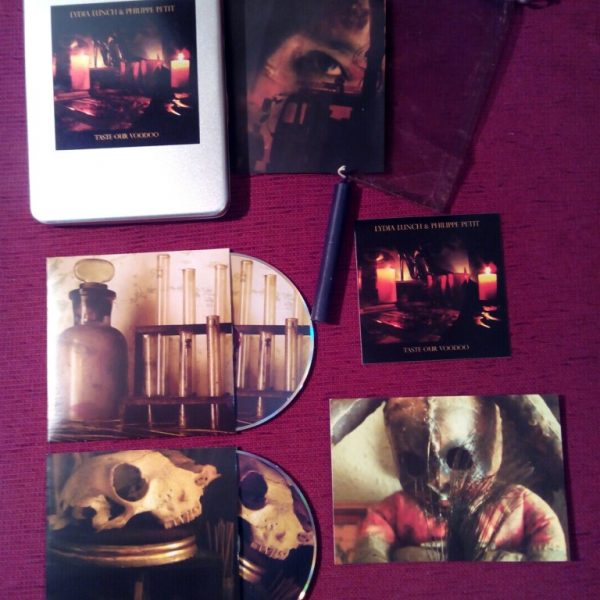 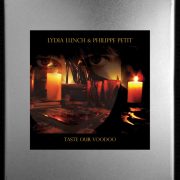 Taste Our Voodoo documents the creative partnership between American songstress, poet, writer and actress Lydia Lunch and French experimental sound artist and turntablist Philippe Petit across a double LP. Lunch emerged in the mid-seventies as part of No Wave combo Teenage Jesus And The Jerks, which formed in New York in 1976, and has maintained the same fiercely individual and independent spirit for over thirty years. Her considerable body of work spans countless solo records, collaborations with anyone from Einstürzende Neubauten, Henry Rollins or Sonic Youth to Oxbow and Omar Rodríguez-López, as well as numerous films, books and plays.

A musical travel-agent, journalist, or record label owner , Philippe Petit has been a figure of the underground music scene for30 years, who has delivered a number of essential records on labels such as Aagoo, Southern UK, Monotype, Alrealon Musique, Beta Lactam Ring, Sub Rosa, HomeNormal, Important, HelloSquare, Public Eyesore, Utech, Staubgold, etc… Whether solo, or collaborating with numerous artists and musicians such as Faust, Eugene Robinson, Murcof as well asoften operating as Philippe Petit & Friends. He his also one of the masterminds behind Strings Of Consciousness, a loose collective counting some twenty more or less regular members.

Recorded live over a period of 2,5 years Taste Our Voodoo bring together their respective sonic universe into a bleak and disturbing soundtrack. There is a striking synergy between the two which is feeds of the mutual respect they have for each other and of the propensity they have to listen to each other and react in consequence. They occupy very defined and separate spaces here, Petit crafting sounds, Lunch dispensing stories, but they work extremely closely, never taking advantage of a situation to gain an edge over the other.

Lydia Lunch’s voice is particularly haunting, and her delivery has an urgency which doesn’t transpire quite as clearly on studio recordings, and Petit’s soundscapes appear sharper, noisier and more angular. Collating decaying structures, fragmented sound sources and distressed layers, he continuously balances his compositions between dream and nightmare, bliss and horror, treading a fine line between very diverging moods to exacerbate the tone of these pieces. Taste Our Voodoo is an essential work which complements and should give an urge to go see’ em whenever/if they come perform close to yours…