xotox was founded in 1998 as a solo-project by andreas davids. adequately described by himself as “industrial for hyperactive people”, the xotox-sound is characterised by hard beats, catchy melodies and merciless noise-attacks. the debut-album “stueckgut” developed a small cult following, which eagerly anticipated the following releases “epos” and “monolith”. with the release of “disinhibition” xotox started performing live around germany, winning more fans and attracting media attention for the first time. the following albums “normalzustand: angst” and “rhythm of fear (live in jena)” got a variety of great reviews. in 2002 “silberfieber” and “nothing” were released featuring the hits “eisenkiller”, “nothing”, “null” and “zweischicht”, which went on heavy rotation in many clubs in germany. both releases had this success resulted in xotox being picked up by industrial label pronoize, which in turn led to xotox getting a much higher profile in part through their contributions to high profile compilations such as “industrial frequencies vol. 5″ and “industrial highlights vol. 1″ both put together by the german scene magazin orkus. in 2003 the first album on pronoize was released – “lichtlos” managed to establish itself on nearly every german dancefloor. “eisenkiller” became the club anthem of winter 2003/04 and “lichtlos” the benchmark album. for the very first time an industrial-act managed to reach number 1 in the german alternative charts (dac) and held on to the top spot for several weeks. but xotox has not been lazy and so in june 2004 the follow-up to “lichtlos” was released also on pronoize. “die unruhe” contained 15 new tracks, including the clubhits “nasse waende” and “mechanische unruhe” as well as several remixes. but there was more: “die unruhe” had a play time of nearly 70 minutes for the price of an ep, a special gift for loyal xotox fans. no surprise then that “die unruhe” sold out before the actual release date just on account of the pre-orders. in 2005 “[psi]” has been released as a jewel-case-edition and as a special limited double-cd-edition in a digipack. “[psi]” reached pos. 2 in the german alternative charts (dac). to celebrate the headlining position of the first pronoize-festival on april, 16th 2006 xotox released the first live-album called “dokumentation i: ton”. recorded in november 2005 at the bpm-club, leipzig (gemany) it contains all clubhits like “eisenkiller”, “winterblut” or “nasse waende” in powerful live-versions. “dokumentation i: ton” is limited to 1000 pcs. and contains also 4 previously unreleased bonustracks which were created in cooperation with x -fusion, spiritual cramp and missratener sohn. right in time for his project’s 10th anniversary the third album “in den zehn morgen” will see the light of day to coincide with the start of the european tour on march, 14th 2008. “in den zehn morgen” contains many club-hits , such as “ewig”, “habitat”, “grob fahrlaessig” or “keine ruhe vor dem sturm”, as well as more experimental tracks. for this release andreas decided to team up with some interesting guest artists: thomas rainer (l.. ame immortelle / nachtmahr) and lahannya, who is best known for her performances with soman but has recently made an impact in her own right with the release of her debut album “shotgun reality”. “in den zehn morgen” will be released both in standard jewel-case format and as a limited box set, which will contain the bonus cd “early recordings” with rare tracks from the beginning of xotox as well as a few other little surprises… the box set is strictly limited to 1000, each numbered by hand. “in den zehn morgen” stayed for the maximum duration of 8 weeks in the DAC, reached pos. 1 and held on to the top spot for 6 weeks in a row! The 10th anniversary could not be celebrated in any better way! in may 2008 „hyperactive – the best of“ has been released as an exclusive north-america-release by vendetta music (under licence of pronoize). this release contains all clubhits and 2 previously unreleased tracks. andreas is also a sought after dj on the electro, industrial and noise scene. Now a split album with detune-x come out on Rustblade. 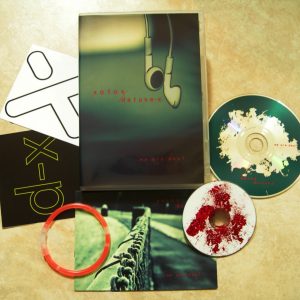 We Are Deaf Limited Box 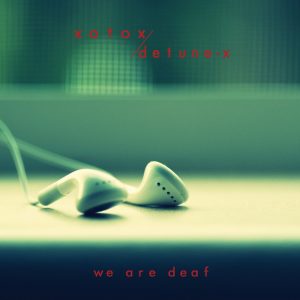