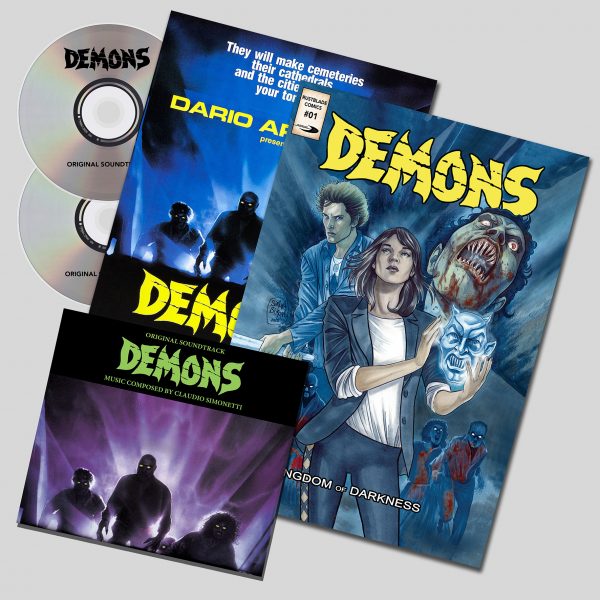 Deluxe edition and definitive release of the Iconic Horror Film soundtrack firmed by Claudio Simonetti for the Horror/Gore movie Demons by Dario Argento and Lamberto Bava. The lower tones as the main characters move through the dark theater give a distinctly ‘creepy’ air to the movie.

A distinctly fightening melody characterizes the ‘transformation’ sequences as the 2nd prostitute slowly becomes a demon. The same melody appears throughout the film in different places. Special Edition Contains The Soundtrack and a Bonus CD with remixes by Ohgr (Skinny Puppy), Leather Strip, Bahntier, plus Original Comic Book “KINGDOM OF DARKNESS ” and Poster

About Comic Book
Ingrid Haller is a famous writer. She dreams Demons and writes books about them.

She goes towards the subway after the launch of her last work, “Kingdom of Darkness”, and, in a frenzy and bloody night, she finds her nightmares waiting for her at the last station.

Ten years after Demons and Demons 2: The Nightmare Returns!, the anthological series “Rustblade Comics”, by Stefano Rossello, introduces a new and hefty comics chapter as a gift to the cult movies directed by Lamberto Bava.

Andrea Gallo Lassere and Simona Simona (from the hit Dawn of the Dead – Hotel La Muerte), show you the fine line between nightmare and reality, and they will lead you where the Evil, in its purest form, begins.

A claustrophobic story made of gore and rivers of blood, to read and listen together with the soundtrack created by Claudio Simonetti’s Goblin